September 6, 2019
Man who Robbed West Mifflin PNC Bank Wearing a Pirates Hat and McDonald's Uniform Shirt Will Spend 4+ Years in Prison (DOJ Release)
https://www.justice.gov/usao-wdpa/pr/man-who-robbed-west-mifflin-pnc-bank-wearing-pirates-hat-and-mcdonald-s-uniform-shirt
Now that's one helluva a headline! Barry Daniels was sentenced in the United States District
Court for the Western District of Pennsylvania to  50 months in prison plus three years' supervised release. As set forth in part, Daniels:

committed the bank robbery while wearing a McDonald's uniform shirt. Daniels was formerly employed by the fast-food restaurant.
According to information presented to the court, on or about September 12, 2018, Daniels, wearing a Pirates baseball hat and a black buttoned-up McDonalds' shirt, entered the PNC Bank at 4917 Homeville Road, West Mifflin, PA 15122, handed the teller a deposit slip with a note on the back, which read: "Give me all of your 100s and 50s." Surveillance video, from the bank, shows Daniels arrive at the bank, driving a black vehicle, enter the bank and rob it, and then exit the bank, returning to the same vehicle which he then drove out of the parking lot. The Court was further advised that Daniels took $505.00 from the bank teller. 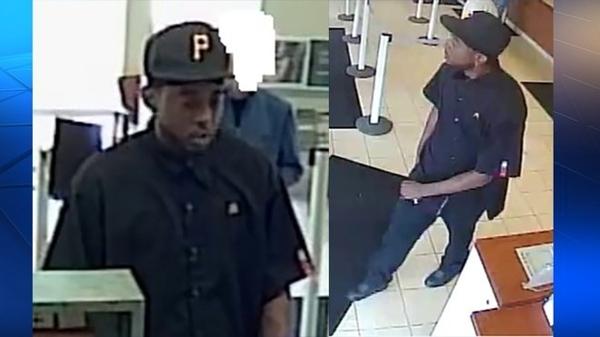 Oh . . . I thought he was literally wearing a pirate hat as in Arrrr maties -- not a Pittsburgh Pirates baseball cap. Thankfully, the Securities Industry Commentator obtained this secret FBI video of a possible accomplice of Daniels:
Accountant Who Cheated Her Friends and Clients via a $27.5 Million Ponzi Scheme Sentenced to More than 8 Years in Federal Prison (DOJ Release)
https://www.justice.gov/usao-cdca/pr/accountant-who-cheated-her-friends-and-clients-275-million-ponzi-scheme-sentenced-more
Retired Certified Public Accountant Carol Ann Pederson, 66, pled guilty in the Unitey States District Court for the Central District of California to one count of wire fraud; and she was sentenced to 97 months in prison and ordered to pay $27.5 million in restitution. In sentencing Pederson, the Court

cited the "grave economic and psychological toll" of Pedersen's "insidious Ponzi scheme" as she "preyed on some of her closest friends."

As set forth in part in the DOJ Release:

Between 1996 and September 2017, Pedersen, who only was licensed to be a CPA, served as her victims' unlicensed investment advisor. Through her firm, Carol A. Pedersen, C.P.A., she solicited her accounting clients' investments through two types of investment opportunities that she offered: "Time Deposit" and "Client Pool." Pedersen told her victims that Time Deposit would invest in low-risk securities providing a fixed return on their money after a period of time while Client Pool would invest their money in the stock market through an investment pool Pedersen had established with other investors' funds.
In reality, Pedersen's fraud was nothing more than a Ponzi scheme. She solicited investors and promised to invest their money in the stock market, but never did. Instead, she deposited the funds into her personal accounts, and then spent the money to fund her own personal expenses, including the payment of her credit card bills, the establishment of trust accounts for her family, and the purchase of real estate. She also used her victims' money to fulfill distribution requests by her other victims - which she falsely represented were returns on their investments.
For example, on July 30, 2015, Pedersen wired $3 million from a purported "Client Pool" account to a personal account that she controlled.
In 2017, after receiving distribution requests that she could not honor with the funds she had available, Pedersen's scheme collapsed. She retired shortly thereafter.
Pedersen's victims, at least 56 people, invested more than $40 million into these accounts during the scheme and their total loss was at least $27,547,839.

[F]rom August 2014 through July 2018, the conspirators obtained personal identifying information ("PII") from victims, obtained fake credit card accounts and cards in the victims' names or linked to their accounts, and used those credit cards to obtain goods, gift cards, and cash at retail establishments and banks throughout Orlando and surrounding areas. Griffin was involved in all aspects of this scheme and, along with Bentley, exploited the advanced age of their elderly victims to steal their identities, causing them to incur fraudulent charges. Scott was involved in the use of, and trafficking in, fraudulent credit cards. The total amount of loss was estimated to be more than $812,000.

SEC Charges Investment Adviser with Fraud (SEC Release)
https://www.sec.gov/litigation/litreleases/2019/lr24586.htm
In a Complaint filed in the United States District Court for the Southern District of New York  https://www.sec.gov/litigation/complaints/2019/comp24586.pdf, the SEC alleged that E. Herbert Hafen violated the antifraud provisions of Section 10(b) of the Securities Exchange Act and Rule 10b-5 thereunder, and Sections 206(1) and 206(2) of the Investment Advisers Act of 1940. In a parallel action, the U.S. Attorney's Office for the Southern District of New York announced criminal charges against Hafen. As set forth in part in the SEC Release:

[F]rom 2011 through 2018, Hafen, while employed as a New York City-based registered representative and investment adviser at large financial institutions, engaged in a scheme to defraud his retail clients. The complaint alleges that Hafen convinced his clients that he had access to an investment opportunity separate from those offered by the financial institution at which he worked, and this opportunity would pay an annual six percent return. According to the complaint, Hafen instructed his clients to withdraw their money from the financial institution, including liquidating stock holdings and personal retirement accounts; deposit that money into their personal bank accounts; and then transfer or wire the money to Hafen's personal bank account. The complaint further alleges that, once Hafen received his clients' money, he did not invest it as promised, but instead used it for his own personal purposes, including paying house, car, and credit card expenses for himself and family members.

FINRA Bars NYLIFE Rep Over Debit Card Expenses (BrokeAndBroker.com Blog)
http://www.brokeandbroker.com/4787/finra-awc-nylife/
Temptation is always there. It's how we respond to the siren's call that matters. In today's FINRA disciplinary settlement, we have the local head of a national organization, which, among other things, promotes ethical conduct among its members. We also have a debit card issued by that organization to said executive. As is the fact pattern with these tales of woe, the executive used the card to pay personal expenses but never timely reimbursed the organization. Worse, as is frequently the case, the inappropriate expenses amounted to peanuts.
In the Matter of the Application of J.W. Korth & Company For Review of Disciplinary Action Taken by FINRA (Order Denying Stay As Moot, '34 Act Rel. No. 86890; Admin. Proc. File No. 3-19206)
https://www.sec.gov/litigation/opinions/2019/34-86890.pdf
FINRA's National Adjudicatory Council ("NAC") found that J. W. Korth had charged excessive markups and markdowns, in violation of FINRA, NASD, and MSRB rules; and, accordingly, censured the member firm and ordered it to pay restitution, to retain an independent consultant to review the firm's pricing procedures, and to pay appeal costs. On appeal to the SEC, the firm seeks a stay of the sanctions. In denying the motion as moot, the SEC offers this rational in part in the SEC Order [Ed: footnotes omitted]:

[F]INRA asserts in response that, pursuant to FINRA Rule 9370, "the censure, order of restitution, and order for an independent consultant are stayed pending the firm's appeal to the Commission." The Commission's Rules of Practice do not provide for an automatic stay of sanctions imposed by a self-regulatory organization upon the filing of an application for Commission review. FINRA Rule 9370 provides, however, that the filing of such an application "shall stay the effectiveness of any sanction, other than a bar or an expulsion, imposed in a decision constituting a final disciplinary action of FINRA." In light of Korth's filing of an application for Commission review, it appears that Korth's stay motion is moot.

Marketing Executive for Two Global Companies Pleads Guilty to Federal Charge for Defrauding Her Employers / Participated in a Scheme with More Than $855,000 in Losses (DOJ Release)
https://www.justice.gov/usao-md/pr/marketing-executive-two-global-companies-pleads-guilty-federal-charge-defrauding-her
Rebecca Jelfo pled guilty in the United States District Court for the District of Maryland to wire fraud. From  approximately 2008 until December 2015, Jelfo worked for a global airline ("Company A") as Head of Marketing and Communications for the Americas; and, between January 4, 2016 and January 31, 2018,  she worked for a global hospitality company ("Company B") as a Senior Director of Luxury Brand Marketing - Partnerships and Promotions. At both companies, Jelfo's duties included contacting marketing vendors and approving certain marketing invoices. As set forth in part in the DOJ Release:

Jelfo admitted that beginning while she was employed at Company A and continuing throughout her employment with Company B, Jelfo participated in an over-invoicing scheme designed to defraud her employers.  Specifically, Jelfo submitted or caused to be submitted, false and inflated invoices purported to be for various marketing services or products provided to her employer.  Jelfo knew that the invoices did not accurately reflect the products or services provided by the vendors, but took steps to make sure that Company A and Company B paid the invoices.  After the companies paid the invoices, Jelfo instructed the vendors to remit payments to cover her personal debts.
As detailed in her plea agreement, Jelfo instructed three separate vendors to remit payments to cover her personal expenses.  Specifically, from as early as May 21, 2015 through August 24, 2016, Vendor 1 remitted payments for Jelfo's personal expenses totaling $263,697, including a $13,000 payment to Jelfo's Neiman Marcus credit card account, a $28,000 payment to Jelfo's Saks Fifth Avenue credit card account, and purchasing $15,000 in American Express gift cards, some of which Jelfo used to make purchases at a high-end furniture store in Washington, D.C.
Similarly, while employed by Company B, Jelfo submitted false invoices purporting to come from Vendor 2.  After Company B paid the invoices to Vendor 2, Vendor 2 remitted payments totaling $106,302 to Jelfo's personal American Express credit card account. On at least one occasion, Jelfo instructed Vendor 3 to submit an inflated invoice to Company B and provided Vendor 3 with fraudulent documentation that appeared to justify the inflated invoice.  Based on Jelfo's request, Vendor 3 sent an invoice to Company B requesting a payment of $74,880.  After receiving the payment from Company B, Vendor 3 made a $64,851.24 payment to Jelfo's personal credit card account, as instructed by Jelfo.
Jelfo admitted that between May 21, 2016 and January 31, 2018, she stole at least $855,587.25 from Company A and B as a result of this scheme.  As part of her plea agreement Jelfo is required to forfeit any proceeds or property obtained as a result of the scheme, and to pay restitution in the full amount of the loss, which is at least $855,587.25.

[D]aubenspeck was tipped by Homer, his close friend since childhood, who misappropriated confidential nonpublic information regarding Ulta's positive financial results from his long-term girlfriend, a high-ranking Ulta employee. The complaint further alleges that after being tipped by Homer, Daubenspeck spent over $1.5 million to purchase stock in advance of the Ulta's public earnings announcements in August 2015 and February 2016. After Ulta issued its earnings releases, Daubenspeck sold the stock for combined profits of $111,472.